Support us. Buy a Book

Road narrows on both sides

You have priority over oncoming vehicles

Give way to vehicles from other direction

In normal driving conditions, you should position your car in the centre of the lane you are driving in. Avoid driving too close to the kerb unless you need to make space for oncoming traffic. 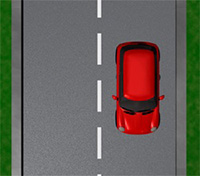 When passing a parked vehicle, you should always try and leave a space of at least the width of an average car door. This is to safeguard against a vehicle unexpectedly pulling out or a car door suddenly opening.

Creating this space will also help you see children moving out from between parked cars to cross the road. If such space can't be created, and you are forced to pass closer to the parked vehicles, then reduce your speed and be ready to stop.

The less clearance you can give, the slower you need to drive. In the first image below, it would be safe for the red car to pass the two parked cars at 30 mph. In the second image, however, where there is less clearance, 15-20 mph would be safer.

When passing a series of parked cars, you should maintain a straight path. Don't weave in and out of them. Maintaining a straight path will allow other road users to clearly see your intentions.

The key questions you should ask yourself when following traffic is:

If the answer is no, you need to slow down and pull back to create a safe gap. On a day when the road is dry, you can use the two-second rule to show you what a safe gap is. As the vehicle in front passes an object, such as a signpost, begin counting. If you reach the same object in less than two seconds, you are too close to the vehicle in front. A safe time is two or more seconds.

If the road is wet, the two-second rule becomes the four-second rule as stopping times double in the wet. In icy conditions stopping distance distances are ten times longer.

When following a large vehicle such as a lorry or coach, you should leave extra space between you and it. If you get too close, your view past it will be limited, and you won't have a clear view of what's happening ahead, which can make overtaking the vehicle dangerous.

Tailgating is following another vehicle too closely. In the image below, the red car is tailgating the blue car.

Tailgating is dangerous because if a tailgated car had to stop suddenly, it is likely the tailgating vehicle would crash into the back of the car.

If you find yourself being tailgated try not to feel intimidated.

For your safety, slow down and increase the gap between you and any vehicle in front, so if the vehicle in front slows suddenly, you will have plenty of time to react, decreasing the chance of the tailgater crashing into you. It also gives more opportunity for the tailgater to overtake you, thus ridding yourself of the problem.

When in slow-moving traffic the first rule is, never obstruct an exit or junction, even a left turn. Hold back until the traffic ahead has moved forward far enough for you to clear any exit or junction. When the traffic stops it is always wise to leave a space of 2 to 3 metres between you and the car in front. This way, if the vehicle in front stalls or breaks down you will have enough space to safely manoeuvre past.