Absolutely nothing to do with driving. Here are four books I have published, all now available on Amazon. Cover, synopsis and opening paragraphs follow. If you have found this website useful, why not buy a Kindle version of one of my books. It'll only cost you £0.99. A five star review proclaiming my genius would also be appreciated. 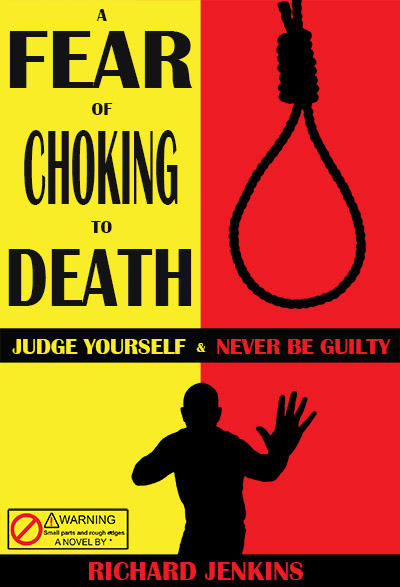 When social phobic Jon discovers the brutally beaten body of Ann, a woman he fears the police will suspect he murdered, panic drives him to make a decision that comes to twist his life free of the control he had so carefully constructed to contain it.

Leaving vital evidence corrupted, he pledges to investigate the crime himself and bring the murderer to justice. However, the pit he has so foolishly dug for himself only gets deeper and darker, made worse when he learns a psychopath has a blackmailing noose tightening around his neck.

The pursuing action provides a darkly comic tale of one man's desperate struggle to remain free and innocent and breathing.

His only option is to learn the dark, selfish arts of survival to revival those of the criminal deviants who come to hunt him down in order to preserve their own selfishly constructed worlds.

"The puke was sports drink pure and fresh. Jon retched it up all over her face. It did nothing to wash away the blood sticking to her hair. The killer wound was obvious, even to a squinting, unfocused stare, the right-side of her skull smashed open. Her blood red eyes still screaming the terror. Why here? Why now? Why Ann? Just seconds ago, Jon walking, a minute from home, a five mile run still fresh in his chest. His mind still emptied, at peace. He ran the Shropshire Hills, swam the pools and lakes. Always alone. A taste of something wild. His one taste now that Ann had told the truth and laughed their affair dead."...continue reading chapter one or buy £0.99 Kindle, £7.99 paperback. 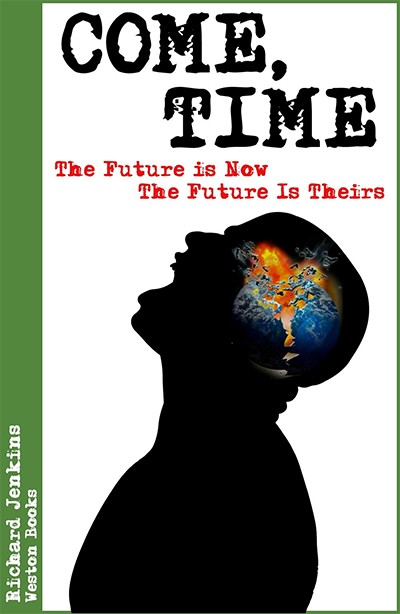 Samuel Dean lives an isolated, peaceful existence; he is alone and happy to be so. The remote coastal area of England where he lives provides all he needs to survive. His daily routine is to hunt, forage and poach.

Someone, however, is stalking him. One night, two officers from Special Branch pay him a visit and ask for his help. They claim two men, extremists in the Animal Liberation Movement, will soon visit a woman who lives in a near-by cottage. All Sam has to do is watch the cottage and inform Special Branch when the men arrive.

He agrees to help, not for profit or patriotic zeal, but because he suspects they have told him a lie. His isolated existence is soon smashed into a world of murder, terrorism and international conspiracy.

Fleeing his own guilt, he is propelled out of his solitude and on to a trail that takes him to London, Paris, Malta and Africa, where he uncovers a sinister group of the world’s elite, who together conspire a dark future for all those beneath them. Only by mimicking their twisted, ruthless logic can Sam hope to contain them.

"Why does God need people? What use are we to Him? In His possession is absolute knowledge, so what can God learn from people? Why create people? What’s the point of doing anything when you know it all already? He knows the beginning and the end of each and every one of us, but still we keep coming, faster and faster, spamming His world with nothing he doesn’t already know, with nothing He hasn’t already seen. We enter His world and face two exits. We are tested, judged. We dare to live and fear to die. We can pass into heaven or fail into Hell. You created me God, but you knew I would ultimately fail. Was I necessary? Was I needed? Did you need me, God? Or am I weight, just ballast? A spec of junkie dust? What can you gain watching me suffer here or forever in Hell?

Does this, us, make Him happy or sad? Can we move God to tears? Can we make him smile? If we fail to educate Him, is our purpose to entertain? Is life an audition for God? Well if so, look away, God, look away from me. I seek no recognition. I need no fame"...continue reading chapter one or buy £0.99 Kindle, £3.99 paperback. 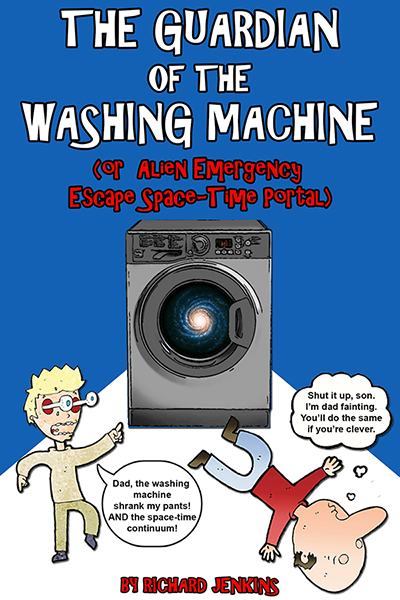 The Guardian of The Washing Machine: Siavash is busy upgrading his house into the world's first intergalactic space taxi. All he needs is an intergalactic spaceship engine, as such a device has yet to be invented by the human race, Siavash plots to acquire one from an advanced alien civilization.

His children, Fairuza and Giovanni, think their dad is crazy. Even with brand new Intergalactic Space Taxi uniforms to wear, neither thinks they are about to become the first kids with Saturday jobs in outer space. But little do they know that the second-hand washing machine Siavash mysteriously acquired does more than clean their dirty tops and smelly socks.

After an accident involving his Intergalactic Space Taxi uniform, a super-sized doughnut packed with the stickiest jam his Nan ever made, and an improvised ballroom dancing routine Giovanni takes the washing machine to maximum power, and his family to somewhere lost in outer space. Stranded and in danger, the family finds themselves at the mercy of a mad alien robot whose dastardly plan looks set to destroy them all.

"To some, gazing up at a clear night sky can be a dangerous activity. If left to ponder the wonder the of the galaxy and the endless space that exists beyond it for even a smidgen too long, their thoughts can drift away to become lost and separated from the everyday realities that fill the everyday lives of all, normal, everyday people. From their dazzled imaginations fantastic ideas and magnificent visions will rocket up into the void of space and explode like fireworks to fill the black with the colour of their dreams.

One such man with a mind vulnerable to the seductive charms of a brilliant night sky was Siavash Reginald Gianluca Rogers (formerly plain Derek John Rogers - still bumbling into middle-age, rapidly balding, as skinny as a lamp post and just as switched on for most of the time he wasn't) who, to the worry of his daughter Fairuza and son Giovanni (aged 11 and 10 respectively), was rather too fond of perusing the night sky with a jittery stare and a beguiled imagination. In fact, he cared little, if at all, for any other view, even that of a working telly, much to Giovanni's concern and confusion. But then this was a boy who firmly believed the only views that mattered were the digital ones he watched and controlled on any LCD screen"...continue reading chapter one or buy £0.99 Kindle, £4.99 paperback. 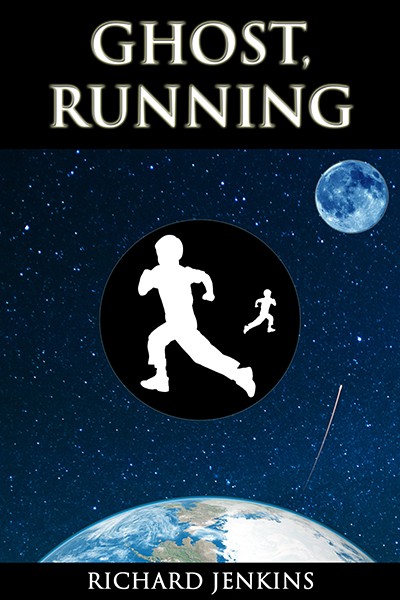 Ben, aged 10, is a lonely, sickly boy, mocked and bullied, reviled in the village for being a coward. The burden of a spiteful aunt, he lives and plays alone. Chased by the monsters that haunt his world, he discovers a sanctuary, a place of hope and calm. But in the cold, damp air of winter, his illness returns to pull his life away. He wakes a ghost as all cowards must, trapped in another world. He is not alone, or safe.

He, as every ghost is, is prey to be hunted. A presence with the power to move through space and time has entered their world and now seeks to delete every ghost from life, from history, from existence.

Ben must learn to fight. Alone, he goes on an adventure through time and space to find the means and strength to lead and inspire the five terrified ghosts he finds and befriends.

He learns of a mysterious book and a magical shield, which was once a power that gave him protection. If he can find these objects, he believes they will enable him to release forces of good that will stand ready to fight the enemy they, the cowards, dare not even name.

To be successful, he must unleash a power hidden in his past and discover in himself a will to lead and fight. He must journey into space and time, into a world of fantasy and legend to learn how he, a ghost, should once again live his life.

"Just beneath the surface of an ordinary lake, a monster was lost to a dreamless sleep. Every night just before dawn, the monster would dive off the Moon and land without splash or witness aroused to fall peacefully and completely asleep. With the first touch of dusk, the monster would wake, stretch its body and sharpen its teeth then rocket back up to the Moon. For the Moon was where other more hateful monsters came, those from far away that coveted the Earth as a home. All had a plan to invade, to steal this earthly realm, to pack it tight with a new breed of beast one formed in the cold black of space, a horrible, crazy mutated thing that could only be nice to its own.

The Moon, to them, was a stepping stone, 'one giant leap for monsterkind,' they would howl, 'one final step for man!' They lurked in the shadows on the edge of the dark side and spied on the people below. 'Earthlings,' they laughed, 'how ripe they are to serve and submit as slaves to a higher, monsterkind!"...continue reading chapter one or buy £0.99 Kindle, £6.49 paperback.